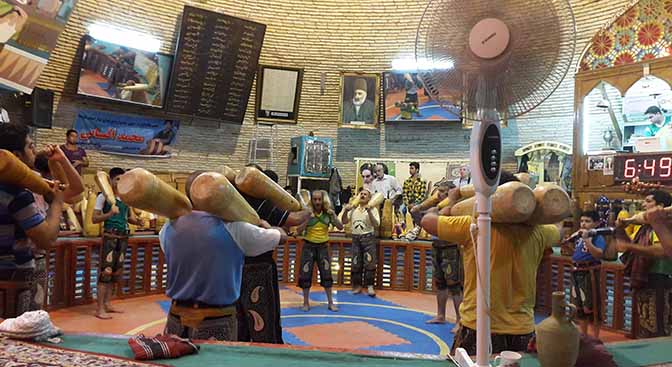 Zurkhaneh is well-known type of traditional Iranian sport that literally means house of power and strength. It is called to the physical structure where some kind of sports are performed and is today used for describing the sports as it is practiced today.

Each humane act leading to generation of conceptual and beautiful symbols is called art. In a classical category, art is divided to seven category.

Considering these arts, traditional Iranian sport would be as following:

Zurkhaneh architecture is considerable for its symbolic concepts and beauty. It’s said that its architectural style is related to Mithraism.

Verses and literature is in traditional sport, special type of heroic used; which is sang by Morshed (Leader).

In traditional sport, music has an important role, this sport is known as most rhythmic kind of sport in the world.

Physical art also, in its most beautiful and conceptual form of it, is observed in traditional Iranian sport.

Therefore five art, out of seven art, are assembled harmonious in this Iran’s cultural masterpiece.

Relationship between Mithraism and Zurkhaneh

There is a relationship between Mithraism and Zurkhaneh ; because:

The goal of Zurkhaneh  Sport surely is preparing people for participation in Pitched battles. Therefore it was held in camp, and probably it is turns to this form after advent of Islam.

Underground and popular being of Zurkhaneh , caused some researchers consider it sequent of an underground Resistance Movement. Some believe this revolt is founded by Mogols after being suppressed by Great Dariush, some also bond it to movement of Iranians against Alexander, Arabs, and Mogols.

Typically, three elements can be considered in Zurkhaneh :

Three principal content that already have been sang by Morsheds:

In legends founding of Zurkhaneh  is considered related to Poorya-ye Vali (700 years ago), that is not irrational. There is no document about existence of Zurkhaneh  before Mogol attack as today, but prosperity of Zurkhaneh  is because of support of kings of Safavi and Ghajar.

Heroic Sport have been held in Iran since 1938 legally and modern, and since 1959 have been globally and have had advocates in different countries.

Pish Khiz (senior of Zurkhaneh h and talented of Pahlavani)

Jahan Pahlevan, the highest rank of Pahlevani in the Iranian army before the Arab invasion