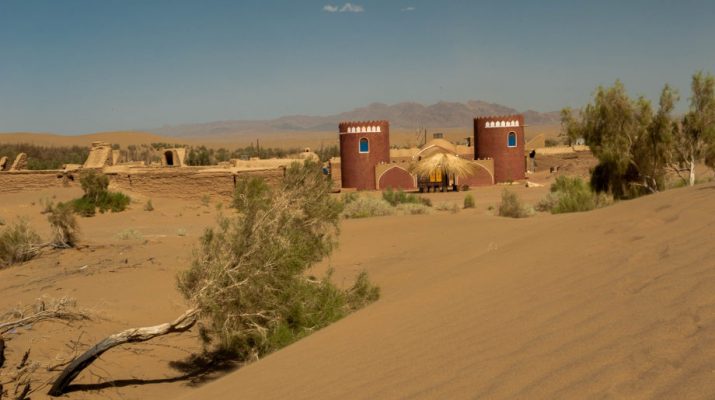 As you can see on the map you spending most of your trip in the “Dasht Kavir” which is one of the two most vast deserts in Iran.
Your Tour starts at Tehran which is a city with about 200 years history since Qajar era (1785 AC) This city is the most modern and populated city of Iran. ‏ Tehran is located south of Alborz mountain chain in the north of Iran. Now Tehran is the political and economical center of the Iran. You will move to “Semnan” and “Damghan”. Many historians suspect that “Hecatoon police” the capital of Parthia was somewhere around the “Damghan”. Also, the ancient site of “Tepe Hissar” is located in Damghan. this city is also famous for Pistachios.
As we finish the visiting of Damghan we will head to the south toward the desert of “Dashte Kavir”. In the middle of the desert, we will see Jandagh village. The old part of the Jandagh village consist of an old castle which dates back to Sasanid era, but some part of the castle still occupied by people. we will continue our journey to “Mesr” village and we will stay overnight in “Mesr” desert.
Here we start the two-day adventure in desert first we will see the desert close the Farahzad village this part of desert includes dunes, a salty river, a small plateau which is famous by the name of “Aroos” which in Persian mean bride. Tonight we camp near to Kalaghdooz desert. In the second day of our adventure, we will head to Aroosan village and we will camp in “Kooreh Gaz” village, which no one live in this village permanently it is currently only using for a place for the camel to come and drink water, also there are some gardens in the village. Tonight we camp in the in the village.
Here we will head to “Khoor” city and we will visit the beautiful salt lake. After visiting Bayazeh castle, we will stay overnight in Bayazeh Hotel.
Today we will continue our cultural part of our Iran tour, we will head to Yazd. Yazd province is located in the center of Iran and the provincial capital of city is also called Yazd which has the largest area made of mud brick and second largest historical city (after Venice) in the world. This city is known as the city of bicycles, sun and fire, and the land of worship. Yazd is also famous as city of wind towers, and wind tower is one of its symbols, you can see wind towers in many of its buildings like hotels, water reservoirs like “six wind tower water reservoir”, and historical building and gardens like “Dolat Abad” garden that has tallest wind tower in the world. “Amir Chakhmaq Complex”, “Water Museum”, “Jāmeh Mosque” and “Time Square” are other historical attractions in the first vast historical fabric in the world. “Zoroastrians Dakhmeh (Tower of Silence)”, “Zoroastrian Fire Temple”, and “Mirror Palace (museum)” are other attractions of Yazd.
Today we head toward Shiraz, and in the way, we visit Persepolis and Necropolis which were ancient sites belonged to Achaemenid empire. Persepolis is preserved very well because it was buried before. You can see from the different nation under control of Achaemenid empire coming to Persepolis to give their gift to the Achaemenid king. Persepolis is a large area of complex of palaces which part it made out of the stone other part was from mud brick and wood which is gone today. after visiting we go to Shiraz and stay overnight in Shiraz.
Shiraz city tour starts tody. Shiraz is one of the most beautiful city of Iran that is located in the southwest of Iran. The oldness of this city is estimated from Sassanid Dynasty so it has different historical places. Different monument (i.e. Shah Cheragh), baths (i.e. Vakil bath), tombs (i.e. Hafez, Sa’adi …), buildings (i.e. Quran Gate), Markets (i.e. Bazar-e Vakil), Schools (i.e. Khan School), Mosques (Masjede Vakil), Museums (i.e. Shah Cheragh museum) are in Shiraz that attracts many visitors every year.
We leave Shiraz for Isfahan. Isfahan is an old city in the center which was two times the capital of the Iran. First time at the Seljuq dynasty and the next time at the “Savafi” dynasty. The city is shaped besides of Zayandeh-Rood river. This city is chosen as the Capital of Islamic Culture in the year 2006 and in 2016 together with Rasht is known as first creative cities of Iran by UNESCO. Imam (Naqshe Jahan) square, Imam and Sheikh Lotfollah Mosque, Chahar Bagh school, Chehel Sotoun (Sotoon) Palace, Vank church and museum, Si-o-seh pol, and Khaju bridge are some of the attractions of this city.
We leave Isfahan for Kashan. Kashan is small city compare to other cities. The most famous attractions of this city are Fin garden, historical houses, and a beautiful bazaar. Most of the old building od city belong to Qajari era, due to a powerful earthquake most of the building before Qajari era are destroyed.