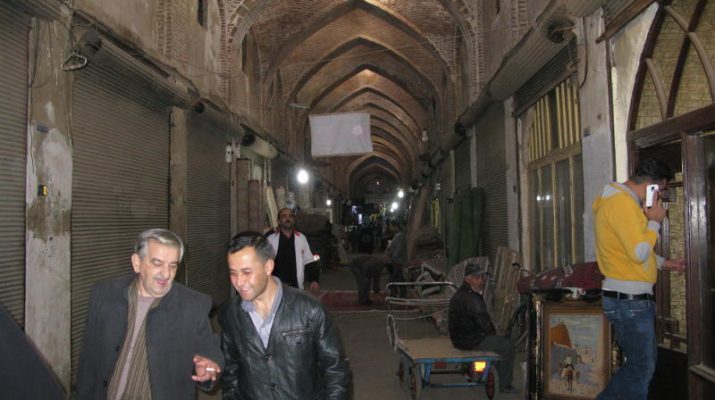 If you are searching an Iran travel plan which you visit apart from classical part also northwest part of the Iran this program would be perfect for you. Depend on how we can arrange flight ticket for your travel to Iran we can change the program. But now we assume you land in Tabriz airport and your departure flight is in Shiraz airport.
Our travel start from Tabriz, Most of the preserved historical sites in the city belong to Safavid and Qajar period. Some of Tabriz sightseeing can be “Shariar tomb”, “Bazaar of Tabriz”(The biggest traditional Bazaar in Iran), “Masjede kaboud” (blue mosque), “Ey goli park”.
We continue our travel to “Zanjan”, the city which in the case of the appellation of it have different opinions were presented by researchers and writers. Zanjan until the late ninth century AH was uninhabited. During the Safavid era, the city is rebuilt and re-started its life activity. Zanjan from past up to now due to the Silk road trade route to India and China to Europe had attracted lots of attention. the most iconic building in Zanjan is Soltanieh dome which is outside of the city. Soltanieh dome considers as the third biggest dome in the world.
We head to Qazvin the beautiful historical city which was a former capital of the Iran under Safavid dynasty. That is a provincial capital now that has been an important cultural center throughout history. Qazvin played a great role in some part of Iranian history. Qazvin contains several historical buildings from the Safavid era, date back to the period in which it was the capital of Iran. Perhaps the most famous of the surviving building is “Chehelsotoon”.
Then we continue our travel to the Teheran the biggest city in Iran, Teheran is the capital of the Iran for the two hundred years.
We continue our travel to Iran toward the south to reach Kashan, a small city in the desert. Due to lots of earthquake in the city most of the building in this city date back maximum to Qajar period (1800 A.C). the most Iconic building in this city is Fin garden, we also can mention some other historical houses such as “Tabatabei” house and “Borujerdi” house.
We head still south toward the beautiful city of Isfahan, Isfahan is an ancient city in the center of Iran and in the margin of Zayandeh-Rood River. This city is chosen as the Capital of Islamic Culture in year 2006, and in 2016 together with Rasht is known as first creative cities of Iran by UNESCO. Imam (Naqshe Jahan) square, Imam and Sheikh Lotfollah Mosque, Chahar Bagh school, Chehel Sotoun (Sotoon) Palace, Vank church and museum, Si-o-seh pol, and Khaju bridge are some of the attractions of this city.
Without stopping the car we need 4 hours to arrive at the Yazd city, Yazd province is located in geographical center of Iran and the capital city of is the first mud brick and second historical city (after Venice) in the world. This city is known as the city of bicycles, sun and fire, and the land of worship. Yazd is also famous as city of wind towers, and wind tower is one of its symbols, you can see wind towers in many of its buildings like hotels, water reservoirs like “six wind tower water reservoir”, and historical building and gardens like “Dolat Abad” garden that has longest wind tower in the world. “Amir Chakhmaq Complex”, “Water Museum”, “Jāmeh Mosque” and “Time Square” are other historical attractions in the first vast historical fabric in the world. “Zoroastrians Dkhmhha (Tower of Silence)”, “Zoroastrian Fire Temple”, and “Mirror Palace (museum)” are other attractions of Yazd.
Know we head to the last city in our program Shiraz, Which has the most iconic structure in Iran near to it, Persepolis which is a complex of palaces date back to Achaemenid era (550 B.C). The city of the Shiraz is also considered one of the most beautiful cities in Iran, Shiraz is the cradle of the most important poet like “Hafez” and “Saadi”. We can mention the other monument such as (i.e. Shah Cheragh), baths (i.e. Vakil bath), (i.e. Quran Gate), Markets (i.e. Bazar-e Vakil), Schools (i.e. Khan School).